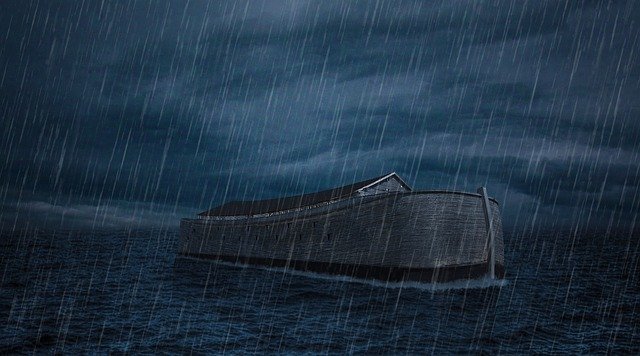 A cataclysmic flood destroyed mankind and all living things on earth, except for eight human beings and the pairs of animals God supernaturally directed to the ark.

Noah, his wife, his three sons, and their wives were the only humans to survive the worldwide flood. But why did God destroy the offspring of Adam and Eve and why did God only spare Noah and his family? Did others have an opportunity to ride out the flood in the ark? Is God actually a cruel and merciless Creator?

The Bible states that in the days of Noah, “The earth also was corrupt before God, and the earth was filled with violence. So God looked upon the earth, and indeed it was corrupt; for all flesh had corrupted their way on the earth.” Genesis 6:11-12 (NKJV) God hates sin and the corruption of man grieved Him. He actually regretted the creation of mankind! Yet, God showed Noah grace because of his righteousness, obedience, and faithfulness.

“This is the account of Noah and his family. Noah was a righteous man, blameless among the people of his time, and he walked faithfully with God.” Genesis 6:9 (NKJV)

“Then the Lord saw that the wickedness of man was great in the earth, and that every intent of the thoughts of his heart was only evil continually.” Genesis 6:5

“And the Lord was sorry that He had made man on the earth, and He was grieved in His heart. So the Lord said, ‘I will destroy man whom I have created from the face of the earth, both man and beast, creeping thing and birds of the air, for I am sorry that I have made them.’ But Noah found grace in the eyes of the Lord.” Genesis 6:5-8 (NIV)

Noah was 500 years old (Genesis 5:32) when his sons were born and he was 600 years old (Genesis 7:6) when the ark was completed. It took approximately 100 years to build the ark. Noah followed God’s design instructions completely (Genesis 6:14-16). Can you imagine the mockery and the insults he had to endure from his neighbors? Can you imagine the financial burden such a boat entailed? Even so, Noah persevered. It took patience, perseverance, faith, trust, sacrifice, and discipline to follow through on this monumental project.

When the ark was finished, God told Noah to board the animals that supernaturally came to him in pairs. Noah did EVERYTHING God commanded. Obedience means following God’s directions, even if we don’t understand or agree with them.

Noah did everything just as God commanded him.” Genesis 6:22 (NIV)

God then told Noah that, “Seven days from now I will send rain on the earth for forty days and forty nights, and I will wipe from the face of the earth every living creature I have made.” Genesis 7:4 (NKJV). Why would God have Noah and his family get on the ark 7 days before the flood?

“ So those that entered, male and female of all flesh, went in as God had commanded him; and the Lord shut him in.” Genesis 7:15 (NKJV)

If you think God is harsh, remember the mercy He provided the community of Noah. It took one hundred years to build the ark and another seven days where the ark door remained open. We serve a loving and patient God but He hates sin and there is a limit to His patience and long-suffering.

“The Lord is not slack concerning His promise, as some count slackness, but is longsuffering toward us, not willing that any should perish but that all should come to repentance.” 2 Peter 3:9 (NKJV)

“Who formerly were disobedient, when once the Divine longsuffering waited in the days of Noah, while the ark was being prepared, in which a few, that is, eight souls, were saved through water.” 1 Peter 3:20 (NKJV)

“He who rejects Me, and does not receive My words, has that which judges him—the word that I have spoken will judge him in the last day.” John 12:48 (NKJV)

“For if we sin willfully after we have received the knowledge of the truth, there no longer remains a sacrifice for sins, but a certain fearful expectation of judgment, and fiery indignation which will devour the adversaries.” Hebrews 10:26-27 (NKJV)