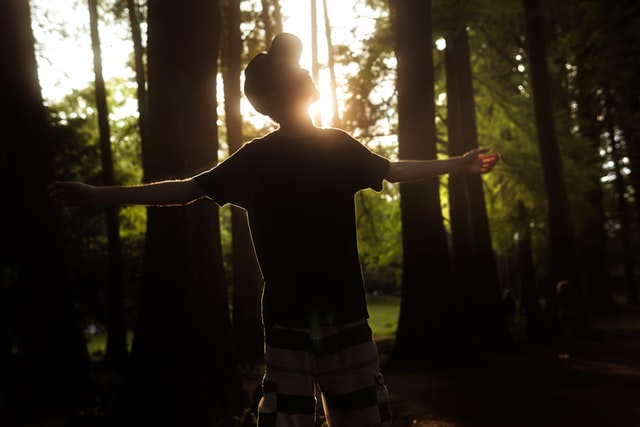 America has set aside a special day to give thanks. It is appropriately called, Thanksgiving. The holiday feast dates back to November 1621, when the newly arrived Pilgrims and the Wampanoag Indians gathered at Plymouth for an autumn harvest celebration. Traditions during this holiday vary from family to family but there is a unifying commonality of expressing gratefulness.

The Pilgrims gave God thanks for their survival. But to whom do we offer up our thanks and praise in modern times? Many Americans are thankful for their good fortune but they don’t credit God for their blessings. God is slowly getting cut out of American life.

We see it in our schools, politics, jobs, holidays, and family life.

Jesus was not above giving thanks to His father when He walked the earth. In fact, He gave thanks for very specific reasons. Let’s take a closer look at when and why Jesus expressed His gratitude.

One time, a crowd followed Jesus for three days with little or nothing to eat. He was compassionately concerned for their welfare. Although we can survive many days without food, it is a discomfort to go without nourishment. Jesus told His disciples to gather any food they could find among the people. They returned with just seven loaves of bread and a few small fish. This did not hinder Christ’s plan. Jesus instructed the crowd to sit down while He gave thanks to His father. After thanking God, the limited amount of food was miraculously multiplied so that over 4000 people ate until they were satisfied.

“Jesus called His disciples to Him and said, ‘I have compassion for these people; They have already been with Me three days and have nothing to eat. I do not want to send them away hungry, or they may collapse on the way.” Matthew 15:32 (NIV)

Another time, Jesus gave thanks for an answered prayer. The story of Lazarus tells us that Jesus intentionally waited to visit Lazarus until he had died. He told His disciples that, “This sickness will not end in death. No, it is for God’s glory so that God’s Son may be glorified through it.” (John 11:4)

When Jesus arrived in Judea, He told the mourners to roll away the stone where Lazarus had been laid. Martha protested, fretting over the odor that would naturally come from a four-day-old corpse. But Jesus assured her that she had no need to fear, they rolled away the stone. At this point, Jesus prayed and gave His father thanks. In faith, He believed God would provide a miracle. Jesus then called out to Lazarus and commanded him to exit the tomb.

“So they took away the stone. Then Jesus looked up and said, ‘Father, I thank You that You have heard Me. I knew that You always hear Me, but I said this for the benefit of the people standing here, that they may believe that You sent Me.’” John 11:41-42 (NIV)

Shortly before Jesus was crucified, He shared a final Passover dinner with His disciples. Jesus again gave thanks to God. He mentioned the symbolism of the wine and bread in light of His own coming death.

“While they were eating, Jesus took bread, and when He had given thanks, He broke it and gave it to His disciples, saying, ‘Take and eat; this is My body.’ Then He took a cup, and when He had given thanks, He gave it to them, saying, ‘Drink from it, all of you. This is My blood of the covenant, which is poured out for many for the forgiveness of sins. I tell you, I will not drink from this fruit of the vine from now on until that day when I drink it new with you in My Father’s kingdom.’” Matthew 26:26-29

This Thanksgiving let us all remember to thank God for our many blessings. Nothing is done through our own strength. God alone has provided us with the gifts and talents needed to achieve our life goals. It is His hand of provision that blesses us with health, love, financial security, food, and peace. We give God continual thanks because everything we have belongs to Him.

The unthankful heart… discovers no mercies; But let the thankful heart sweep through the day and, as the magnet finds the iron, so it will find, in every hour, some heavenly blessings! ~ Henry Ward Beecher